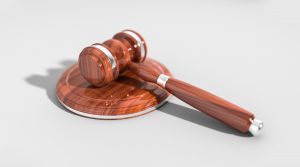 “A landlord may not penalize tenants for the presence of an assistance animal by imposing fees or insurance requirements solely because of the animal’s breed or size,” department Director Kevin Kish said in a news release.

In 2016 a lawsuit was filed on behalf of a tenant and his wife in which they accused their former landlord of discrimination based on their emotional support pit bull. Claims are still disputed by the landlord.

Under the settlement agreement, Kurian and his company, Goodman Villas IV, must:

The story according to the lawsuit:
The tenants had two emotional support dogs, a pit bull and a Pomeranian, when they moved into their apartment northeast Bakersfield in January 2015.

Four months later, the landlord allegedly told the tenants that his liability insurance would not cover any dog weighing more than 20 pounds, so the pit bull could not stay.

The tenants purchased a $100,000 insurance policy covering the dogs, but the landlord told them they needed a $1 million policy to cover the pit bull. The tenants were served an eviction notice that would only be rescinded only if the couple got rid of the pit bull, despite the tenants having medical documentation that both dogs were support animals.

The landlord argues that the tenants had 3 dogs, and the pit bull was not one of the support dogs but instead a pet belonging to one of the tenants’ aunts. There was also growing concern over the pit bull after complaints from other tenants in the complex said it was chasing people including a small child.

“I’m concerned about the safety of the other tenants,” Kurian said, adding that he was not in favor of settling the case but that his insurer insisted.

How do you limit your risk?

To limit risk of this happening to you, we recommend Petscreening.com to all managers.